An autumn month at ‘Woodbank’ by Jenny Skinner 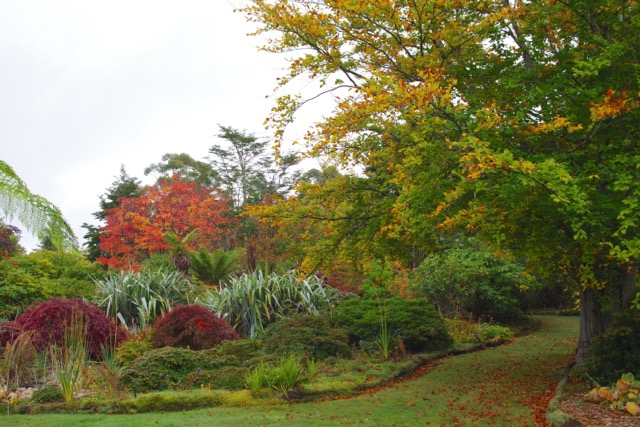 Woodbank is magical in the mist. The autumn colours seem even more vibrant than in full sun. Today, the maples are spectacular.
Woodbank has about 40 different species and cultivars from Asia, Europe and America. The most beautiful varieties must be the Japanese maples: Acer palmatum and Acer palmatum var. dissectum. My favourite is A. palmatum ‘Villa Taranto’, a small tree with slender strap- like leaves, that turn orangey yellow at this time of the year. It makes a great contrast to its neighbor, A. palmatum var. dissectum ‘Seiryu’ , whose leaves turn a spectacular fiery red. In another bed, we find the smaller rounded shape of A. palmatum var. dissectum ‘Garnet’ which is a cultivar with rich burgundy leaves.

Of the European species in the garden, Acer platinoides ‘Crimson King’, the Norway maple cultivar, is the tallest and most eye-catching.

And back to the weeding! Always look up when you’re weeding under a big tree, to get a different perspective. I was working under one of the many species of deciduous conifers at Woodbank, (the swamp cypress Taxodium distichum) when I looked up through the orange feathery leaves to the blue sky above. Then I went crawling around on my knees to look for its knees. This tree produces woody protrusions, called ‘cypress knees’, up from the soil around its trunk. These were once thought to provide oxygen to the roots in swampy soil. However, It is now thought that their function is to stabilise the tree. These trees are very long-lived, the oldest recorded being 2824 years old, in North Carolina. Ours are just youngsters.

Close by, as a solitary specimen in the lawn, is a dawn redwood, Metasequoia glyptostroboides, a deciduous conifer thought to be extinct in China until the west rediscovered it in the 1940s. Although still endangered in the wild due to deforestation, happily there are many growing in arboreta and gardens around the world. In fact in Eindhoven in the Netherlands, it is grown as a street tree. 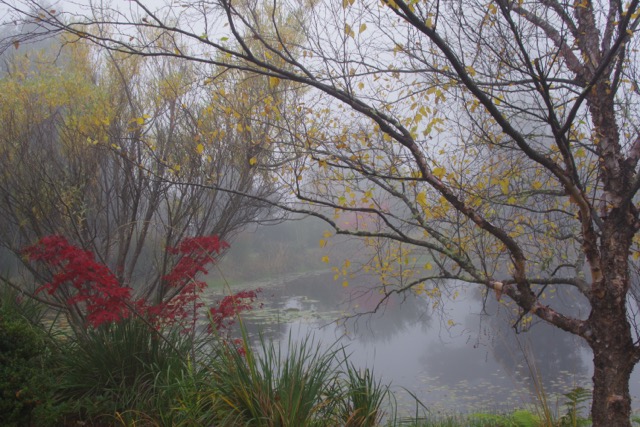 The pool in the fog

In another part of the garden, I came across the first buds and flowers of Ladizabala biternata, a vine that is native to Chile. It has a very unusual purple brown flower, which is either male or female.

For the past few weeks we have been extremely lucky to have had the expert arborist David Prout at Woodbank. He has not been able to get back to the UK due to the present pandemic crisis, so he has been sharing his expertise with us; as a result the garden has had a massive make-over! Thank you David. 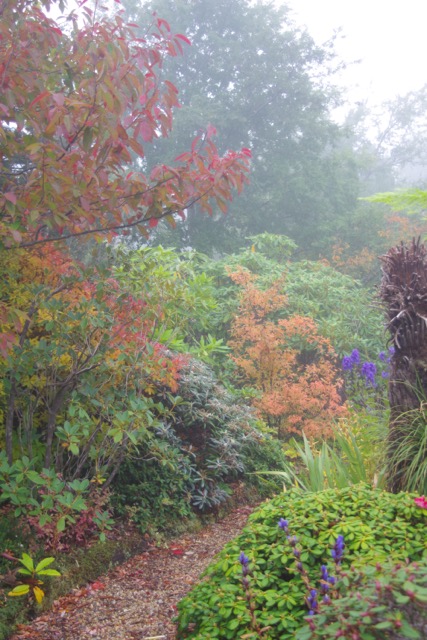 A foggy morning at Woodbank 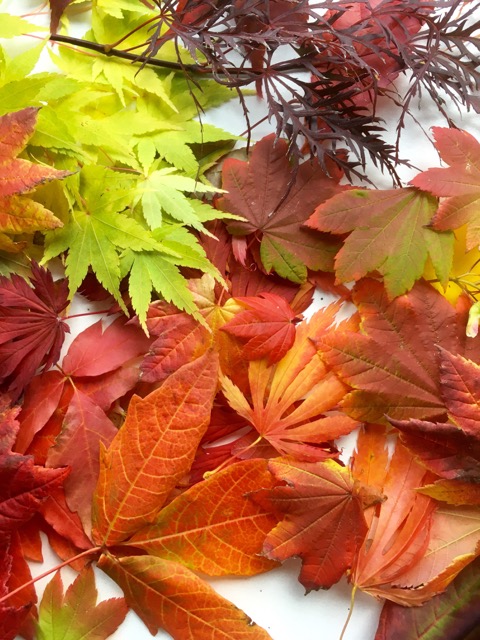 A collage of autumn maple leaves 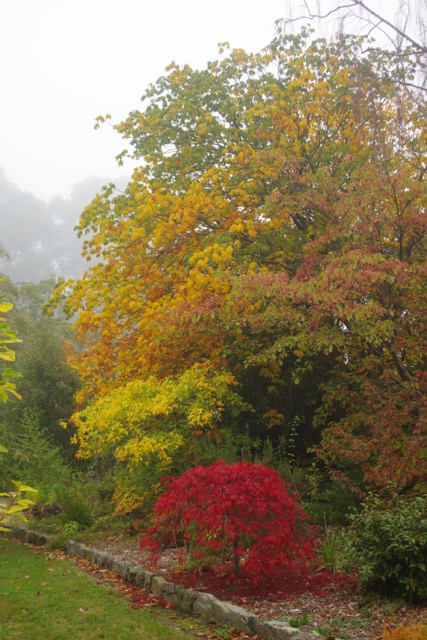